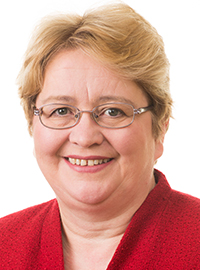 Jean was raised locally on Alt Estate and educated at Alt Primary and Hathershaw Comprehensive schools.

After studying an MBA at Bolton Institute she returned to live in Hollinwood in 1989.

Jean has lived in Hollinwood since 1989 and was first elected as a ward councillor for the area in 2003.

She has held several Cabinet Member posts covering a wide range of areas that include housing, health and wellbeing, town centres, culture and tourism.

In 2013, Cllr Stretton was named ‘Community Champion of the Year’ at the C’llr Achievement Awards organised by the LGiU for what judges called her “inspiring work to help her community in Oldham recover following a gas explosion” in Shaw.

Married to John, she has two step-children, five grandchildren and a great granddaughter but describes herself as “a very, very young great granny”.

Amongst her other duties, Jean is chair of Oldham Credit Union, a governor at Oasis Academy, Limehurst primary and has served on the Contour Estate Board since 2003. She is also a keen supporter of Oldham Foodbank.

If you have any queries or problems that need to be discussed with your Labour Councillor please contact Councillor Jean Stretton on telephone number 07875 676 710 or via email at Jean.stretton@oldham.gov.uk

Brought up on Alt Estate, educated at Alt Infant and Primary, then Hathershaw Comprehensive.  MBA from Bolton Institute (before it became Bolton
University.)

I have lived in Hollinwood since 1989 and was first elected as a Labour
Councillor for the Hollinwood Ward in 2003. Since May 2021 I have been Cabinet Member for Corporate Services

I have been involved in a number of litter picks and alley cleaning events with fellow ward councillors and residents who volunteered to help clean up their areas. More are planned and there will be a deep clean of all of the streets and alleyways in Hollinwood later in 2022 as part of the borough-wide “Don’t Trash Oldham” campaign.

During the pandemic I continued to represent Hollinwood residents at meetings that were held by computer rather than in person but now we are back to holding meetings face to face. This also means that ward surgeries can go ahead, and I have started holding these again. Throughout the pandemic I was contactable by telephone and email and continued to help residents with a variety of concerns about things like fly-tipping, benefits, anti-social behaviour, housing, planning, and education issues.

Along with fellow ward councillors I have continued to use ward member funding for environmental projects. During the year I have helped Limehurst Lions RLFC with funding, including for new goalposts for the younger team members. Many community groups have not been meeting and the restrictions prevented school holiday activities. Hopefully, community groups will start to meet again soon and activities for young people can go ahead. I would welcome requests for funding from community groups.

I am Chair of Oldham Credit Union. I am a governor at Limehurst Primary school and a member of the Oasis Hub, which supports Oasis Academy Oldham and Oasis Limeside primary school.